Many talented actors have identified themselves as being a highly sensitive person, or at least talked about their sensitivity or shyness.

Being shy is not the same as the personality traits of high sensitivity or introversion (which are also different from each other) but many of us are both shy and sensitive, possibly also introverted.

Journalists may refer to some actors, musicians and other artists as “shy” and artists may identify themselves that way, although really referring to high sensitivity or introversion.

Rooney Mara has commented about one of the main qualities we experience as a highly sensitive person:

“I pick up energy really easily. Even if I go to the grocery store and no one is paying attention to me, I can pick up other people’s moods and it’s really intense. … I like being alone. I need a lot of alone time as a human.” [From her imdb profile.]

In an article, she says more about being sensitive or introverted:

“I’m a very moody person,” Mara said, explaining why she took a year off after the rigors of filming “The Girl With the Dragon Tattoo.”

“I’m kind of all or nothing. A lot of times, I feel like I have to spend some time living in order to act again.”

“I’ve kind of been preparing for that my whole life,” Mara said of her role in “Carol,” which earned her the best actress award at the Cannes Film Festival in May.

“I’m a very quiet person. As a quiet person, I feel that’s wonderful. Extroversion is over-valued.”

Being “moody” as Mara calls herself, fits in with a list of qualities of creative people described by creativity researcher Mihaly Csikszentmihalyi – see my post The Complex Personality of Creative People.

Here is a clip from the Conan show, in which she talks about being shy:

A magazine article notes that for her role in Side Effects (2013), Rooney Mara “spoke to psychologists, met with sufferers of depression, studied online video diaries – even visited the psych ward at Manhattan’s Bellevue Hospital.”

“I think everyone has at some point in their lives been depressed, or at least sad,” she says. “I had a lot of anxiety growing up because I was so shy, so I could relate to that part of it. But severe clinical depression is a whole other thing, and I guess I never really knew how bad it can get.”

From Rooney Mara: The Changeling by Hamish Bowles, Vogue, January 14, 2013.

Mara talks about the pleasures of working in a community of artists:

“My favorite thing about acting isn’t necessarily the acting part. It’s that you never stop learning, you’re constantly learning new skills and new things about people. To me that’s really interesting and fun.”

“Everyone on set is also a gypsy. We’re all like carnie folk. We’re all freaks. We’re all insane. But there is an understanding there.”  [Both quotes from imdb.] But, she says, having to appear on red carpet events can be very stressful and emotionally challenging:

It’s “a nightmare! It’s a panic attack waiting to happen.

“I don’t even like people to sing ‘Happy Birthday’ to me. When we wrap a film and everyone claps and cheers, I turn red.

“And then I have to walk out onto the middle of this carpet and there are all these photographers, and they’re all screaming at you.

“And usually there’s a party at the other end of it, so it’s not even like I have solace at the end of the carpet! It’s like then I have to walk into my other nightmare!” 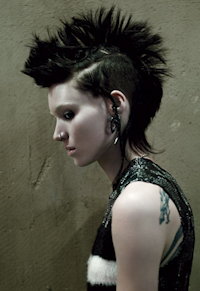 She uses her intelligence and other personal qualities in making her character so compelling, and comments about Lisbeth in “The Girl with the Dragon Tattoo”:

“The thing that I found most interesting was that she could be as off-putting as she is, but at the same time she’s also quite innocent and childlike.

“She’s this genius and she’s brilliant, but at the same time she’s kind of naive and emotionally stunted. So I think that sort of makes her very unpredictable; you don’t really know what you’re going to get, what’s going to pop out of her.”

Much has been written in reviews about her ‘goth’ appearance in the movie, but Mara thinks “She’s not a badass, she’s not a punk. I hate it when people call her a punk or goth, because to me that’s just the antithesis of what she is.

“I think in order to be punk or goth, you have to be part of a group or part of a subculture, and her whole thing is that she never wants to draw attention to herself. She dresses the way she does because society has constantly, throughout her entire life, told her that she’s worthless.”

From post: Rooney Mara on the Extra Intelligent and Intense Lisbeth Salander.

[In her article (a guest post on my High Ability site) 3 Things To Learn From The Girl with the Dragon Tattoo – A Gifted Trauma Survivor, psychotherapist Lisa Erickson writes about the connections of this character with gifted teens and adults.]

In her few comments above, Mara refers to a number of aspects of being talented and creative – topics addressed in many posts on my multiple sites. Here are a few more, in addition to ones above:

Introversion, Sensitivity, Shyness – Are They The Same?

Intensity and Being Creative
A personality trait that may often accompany high sensitivity (experienced by many, or most, creative people) is high intensity. You can see some forms of intensity in many actors and musicians.

Using Your High Sensitivity Personality As an Actor

Introverted, Shy or Highly Sensitive in the Arts

Sensitive to Anxiety and Depression

This  last article includes some resources to relieve anxiety:

The Linden Method – Using Behavioral Science for Anxiety
One of many testimonials: Kate Ford, actress in “Coronation Street” — “I have been suffering with nerves for years. The Linden Method really works for me.”

Overcoming Performance Anxiety Course [article includes video]
This is “a focused, effective, online course for any performer who wants to be more confident on stage.”

How to Deal With Anxiety videos – the Anxiety Solutions channel.